The KW Record featured an article about Adah, owner and founder of Dfy Studio, focusing on Dfy’s involvement in the tech community of Kitchener-Waterloo. The article touches on Adah’s professional background and some of the local projects Dfy has been working on.

“She plays an increasingly visible role in the region’s burgeoning startup scene — designing, building and decorating the workplaces. Startups comprise 75 per cent of her business right now.” Terry Pender

“Her biggest canvas so far is 137 Glasgow St., called Catalyst137. That’s where Miovision is located. Miovision’s office has 65,000 square feet of space, two living walls, private booths for quiet phone calls, murals on the walls and a circle-shaped cafeteria that doubles as a common area and meeting room.” Terry Pender

“Catalyst is my biggest canvas, but Miovision is probably the most detailed. Overall it was 10 times more work than Catalyst.” Adah Noelting

“She designed the main lobby for Catalyst137 that includes Christie tiles for digital displays, more wall murals and meeting spaces along the walls, and the long, central corridor. She will also do the coffee shop, market and restaurant in that building, as well as two of the hardware startups locating there — Swift Labs Inc. and SnapPea Design.” Terry Pender

To read the full article from the KW record, click here!

Click here to see the Red Circle Coffee project, in the Catalyst 137 Lobby! 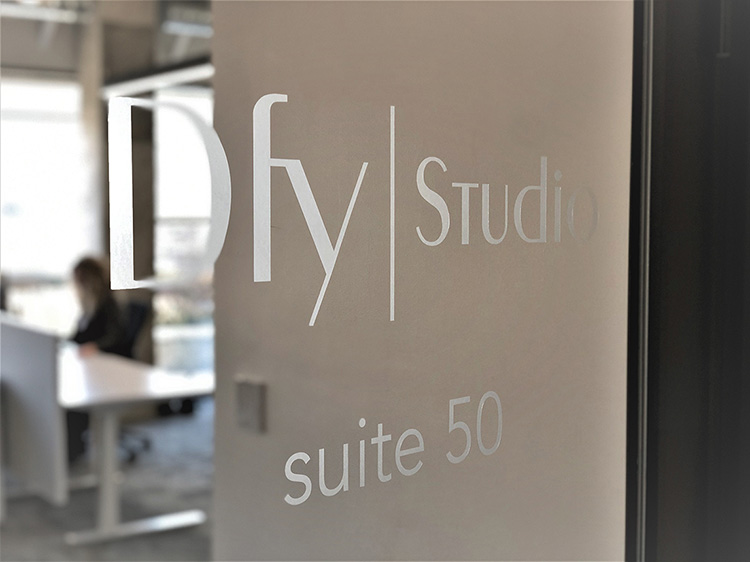 Hey! We’re the Dfy team. Take a look what we’re talking about by checking out our blog, Dfy the Norm.